You sometimes see fixed gear riders on the streets with no brakes on their bikes. How do they manage to get around safely? And why on Earth would anyone do such a thing? You could be forgiven for thinking they must be crazy!

I’m here to tell you that they have their reasons, and they probably go deeper than being too lazy to replace their worn out brake pads.

Fixed gear bikes can be slowed down by resisting the motion of the pedals. Experienced riders become so accustomed to this that some consider hand brakes redundant and remove all unsightly calipers and cabling in the pursuit of minimalism and simplicity or, depending on who you ask, elitism.

Why would anyone want to ride a bike without brakes?

There are many reasons to ride brakeless, and you’ll get different answers depending on who you ask. Later in this article we’ll discuss the safety and legality of brakeless riding, but first let’s go over some of the most common reasons why some fixed gear riders choose to ditch the brakes.

In this sense, brakeless fixies are more reliable and require less work to maintain. Meanwhile, their brake-equipped counterparts suffer mechanical issues, dragging of misaligned calipers, worn brake pads, wear and tear on the braking surfaces of the wheels, and so on. And that’s not to mention the additional weight and air friction slowing them down.

Aesthetically, a bike that has no messy cables, brake levers or calipers looks really neat. The clean lines and simplified silhouette make it visually more appealing.

OK but what happened to function over form? Well, from a practical stance, if looking at your bike makes you happy then you’ll be far more likely to want to ride it and therefore, in a way, prettier bikes make you a fitter and more experienced road cyclist.

Perhaps the most appealing aspect of riding brakeless is the simplicity of a bike that truly has no more components than it needs. In some sense you feel less tied down, as though you have been freed from the needless complications life has thrown at you.

We can all agree riding a single speed bike up a hill is typically more strenuous than riding an equivalent multi-speed bike up the same hill. So arguably, riding single speed is harder work and will make you fitter. But what about downhill?

With a hand-operated brake, descents are a breeze: you can freely bomb down any hill, fearless in the knowledge you can effortlessly come to a halt at the bottom by simply squeezing a lever.

Not so for brakeless riders. They have to work their way down cautiously, pushing and pulling on the pedals to resist their inevitable rotation forwards in a continuous effort to maintain a controllable pace.

I’d be remiss not to mention this one as it’s perhaps the most well known if not the most popular reason. Thing is, you can’t really tell anyone you ride brakeless for this reason, as doing so would immediately make you look uncool. Or maybe you can but only ironically … I don’t know.

Riding brakeless is like saying “I’m so confident and experienced in my ability to ride fixed gear that I don’t even need a brake.” It’s like a badge of honor in the eyes of some. There’s a certain elitist attitude going on here and I’m not sure it’s healthy, but there it is.

Lastly, some fixed gear bikes you see on the streets are actually retired track bikes—they were once ridden exclusively on the banked tracks of a velodrome but have since been relegated to street use for whatever reason.

Seeing as these track bikes never even had holes drilled in the frame, you’d have to go to great lengths to get caliper brakes mounted to them. And in some sense it would be a shame to ruin such a pristine bike by drilling a great big hole in the fork.

How do you slow down without brakes?

Aside from hand brakes (if you have them!), there are a few ways to slow down a fixed gear bike. Most of them involve resisting the motion of the pedals. If you’re not familiar with how this all works, take a look at What Happens If You Stop Pedalling on a Fixed Gear Bike?.

Even if your fixed gear bike is equipped with brakes (as it probably should be), it’s still worth learning some of these techniques.

The most common, easiest and safest way to slow a fixed gear bike down is to gently apply resistance to the motion of the pedals. This directly slows down the rotation of the rear wheel much like feathering a rear hand brake.

This kind of braking is only possible on a fixed gear bike due to the fixed nature of the drivetrain. Again, see the link above if you’re not familiar with this.

If you resist the motion of the pedals hard enough, your rear wheel will lose traction and skid along the road surface. The resulting braking power depends on a number of factors such as weather conditions, road surface type and tire quality.

In wet conditions and on smooth or loose road surfaces where there is less traction, it will be easier to throw the bike into a skid but the braking power will be significantly reduced. Skidding in these conditions can be dangerous as it is easy to lose control of the bike entirely.

On the contrary, dry paved roads will have a much greater traction and therefore greater braking power.

Also a popular technique is skip-stopping, where you begin by doing a kind of stoppie (i.e. lift the rear wheel up), bringing the rear wheel to a stop as you do. When it hits the ground again, there is a moment of friction between the tire and the road surface that slows you down a little.

It’s almost like you’re using gravity to do a tiny little skid as you land the stoppie.

Done repeatedly, it’s often easiest to come to a stop rapidly using a combination of this and the above methods.

I don’t recommend this one except in rare circumstances, such as a dropped chain and no hand brakes. It’s where you place the bottom of your foot on the rear wheel, against the tire and just behind the seat stays. The more force you apply, the greater the braking power.

In contrast to resisting the pedals, one advantage of this unorthodox technique is that it requires significantly less physical effort since it’s your shoe doing most of the work. 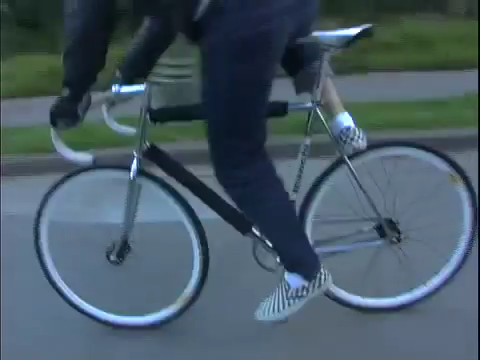 Named after DJ Ted Shred, pictured above demonstrating his signature manoeuvre. If you can believe it, the guy does this regularly because he rides freewheel and without brakes. Madness if you ask me.

I don’t recommend this one either. This is where you create friction by sliding your foot along the ground. Not only is this an excellent way to tear up your shoes, but it’s not very elegant either and probably not all that safe. 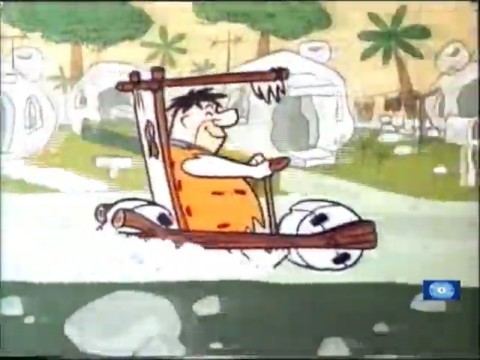 Named after the main character of 60s cartoon series The Flintstones. Fred brings his “car” to a halt by digging his heels into the ground.

Is it safe to ride brakeless?

Whether this practice is safe has always been up for debate and remains a contentious topic in the fixed gear community. This section covers some of the arguments often made either way.

What’s not up for debate, however, is what the law currently says about riding brakeless on public roads. To find out whether riding brakeless is road legal in your region, see Are Fixed Gear Bikes Illegal? What About Brakeless?.

Things are different on the track. If you didn’t already know, bikes intended for use in a velodrome are made to meet a very different set of criteria than those made for the road.

For a bike to be track legal, it must have no freewheel and no hand brakes. On the track we often ride in close proximity for an aerodynamic advantage. If the rider in front of you had hand brakes it would be very dangerous since they could rapidly slow down at any moment without warning; you’d have no time to react. And when you get a face full of rear wheel, you’ll likely knock down the rest of your teammates behind you like skittles.

So hand brakes are not allowed on the track, but we still need some way of slowing ourselves down. That’s why we have to ride fixed gear. It’s much safer if riders are only slowing themselves down gradually.

Finally we come to the question of whether it’s safe to ride brakeless on the roads. Again, this is a highly controversial debate with very strong feelings and fiery arguments from both sides.

Common sense is unquestionably on the side of caution here, since real lives and limbs are at stake. It’s surely a good idea to have an effective hand-operated braking mechanism, in particular a front brake at least. And so on the one hand, it’s difficult to justify going without this safety measure and thereby putting yourself and others at risk of injury or even death.

There are certainly a few bad apples who ride their brakeless fixies at irresponsibly high speeds in busy traffic, running red lights, bombing hills, and generally being impolite road users—and I don’t condone that at all.

However, I don’t think brakeless riding is as crazy as it’s made out to be. In fact, it may even be safer—you see, without brakes, your braking distance becomes quite a bit longer and so in order to ride safely, brakeless riders must maintain a slower pace. This has the additional effect of reducing your thinking distance too, meaning you have more time to react to unexpected hazards.

Brakeless riders have to look further ahead and be more conscious road users. Particularly in busy city traffic, they have to always remain vigilant of which car, cyclist or pedestrian could come from which direction, when, how fast, and where to go if that happens, and what action needs to be taken right now in order to avoid such a scenario, and so on.

When your emergency brake is nothing more than an improvised rear wheel skid (which, by the way, is surprisingly effective when done right), the only safe way forward is to avoid danger in the first place. That means riding slowly, being considerate of others, respecting road traffic laws, and generally being a responsible road user.

Of course, you can do all of those things with a brake too, so perhaps this is a moot point. But who knows how many cyclists are over-reliant on their brakes to get them out of trouble? If they had no brakes, maybe they’d ride more cautiously to begin with and there would be fewer accidents.

At least we can all agree that riding brakeless on the roads with a freewheel—Ted Shred-style—is nothing short of insane.